“The treasury of Sacred Music is to be preserved and fostered with great care. Choirs must be diligently developed, especially in Cathedral Churches…” (Sacrosanctum Concilium, Constitution on the Sacred Liturgy, 120)

At the Basilica of the Co-Cathedral of the Sacred Heart, the music program strives to enhance worship throughout the liturgical year: Sunday and Holy Day Masses, weddings, funerals, and Diocesan events, including the Rite of Election, Chrism, Confirmation, and Ordinations. For Diocesan occasions, the singers of the Basilica are often supplemented by a combined Vicariate Choir.

The Basilica Choir
Sing to the Lord a new song! -Psalm 96
Join the choir to praise the Lord through song. This mixed-choir of SATB voices provides music for the 10:00am Mass each Sunday. Weekly rehearsals are held each Thursday from 7:00 - 8:30pm. New voices are always welcome!

Cantors
These leaders-of-song assist during Mass to proclaim the Psalm Response and the Gospel Acclamation during the Liturgy of the Word. Cantors are also asked to lead the assembly by singing hymns in the absence of a choir.

Cherub Choir
These young singers share their joy for music with the parish by singing at select Masses and events. The Children's Choir is open to 2nd-8th grade students.

Hand Bell Choir
We are excited to announce the development of a new hand bell choir! Some experience with reading music is required. Come and ring for the Lord! 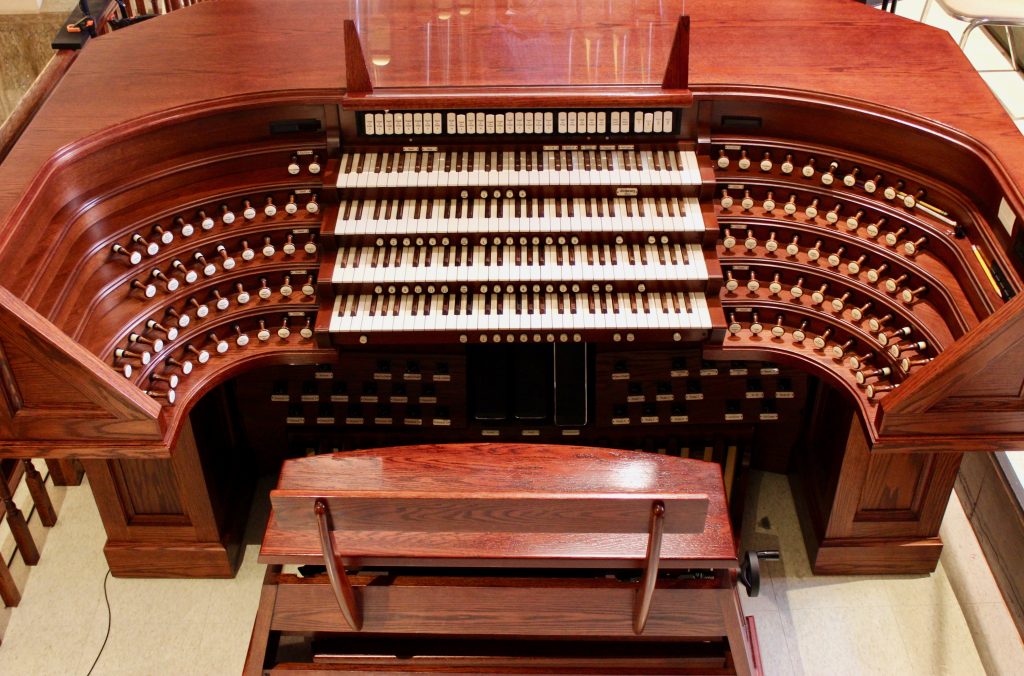 In 1983, an Organ Study Group was appointed to look into the question of the aging and failing Kilgen pipe organ. Following extensive work by the Organ Study Group, and a vote of the entire parish, the recommendation was made to purchase a new pipe organ.

Schantz Organ Company of Orville, Ohio, was awarded the contract to build a new organ for the Co-Cathedral. The contract was signed on November 10, 1983. It called for a 60 rank instrument to be built and installed on or about Easter, 1984. The new Schantz consisted of the Great Organ, which was exposed; the Positif Organ, unenclosed; the Swell Organ, which was enclosed under expression; and the Pedal Organ. The console was to be a three manual, English-style, with four levels of memory, and seven general pistons. Thumb pistons numbered Great, 5; Swell, 6; Positif, 5. There were 7 general duplicate toe studs, a Swell expression shoe and a crescendo shoe. The organ was purchased at a cost of $300,000.

The 1984 organ served the liturgical needs of the parish, but limitations and the tonal design of that organ presented difficulties when called upon to accompany grand liturgies or to accompany others. What the organ had in the way of bravura, it lacked in subtelty, nuance and expression. The organist could not shade, vary and subtly change both the timbre and intensity of the organ’s tonality.

A contract was signed with the Schantz Organ Company in October, 2011, which, among other things, specified the following: Removal of the organ to the company workshop, complete washing and rounding of all flue pipework, reed stop renewal and shallot resurfacing, all pipework regulated for optimal speech/timbre, thorough cleaning and adjusting of all organ mechanisms. Additionally, a new four-manual French-terraced console was built, the Positif was put under expression, some existing stops were re-worked into new voices, new pipework was added--specifically a new Geigen 8', a Tuba 8' and a new, regal Trompette Majeur 8'. Two new 32' Walker stops were added in the pedal. An unenclosed Ancillary Organ, consisting of four ranks, was installed behind the High Altar, to be primarily used to accompany the chants of the priests and to accompany the Cantors in the proper execution of the Responsorial Psalms. While this Ancillary Organ is now played from the console of the grand organ in the gallery, provision was made for a future free-standing single manual console from which it can be played from any position in the church.

The 1984 organ was removed in January, 2012, and installation of the newly refurbished and expanded Schantz began on August 13, 2012. The tonal finishers completed their on-site work on September 29, 2012. The cost of this expansion was $700,000 and was paid for entirely by an anonymous parishioner. The current replacement cost of the organ is $1.5 million.

The new Schantz was blessed by Msgr. Sadie at the 10:30 AM Mass on Sunday, September 30, 2012, and the organ was used for the first time at that Mass.